Cocktails have come a long way in the 21st century. Good cocktail mixology has turned into an art form, combining science, creativity, and skill. Limits are being pushed, boundaries are being broken, and new flavours are being born. Even tried and true classics, like the Old Fashioned and the Whiskey Sour, are being updated. It’s a pretty darn exciting time to be making and drinking cocktails. I mean, does anybody even order a rum and coke anymore?

As one might expect from a city with a deep culinary tradition, Vancouver is leading the vanguard of this new cocktail culture. An abundance of restaurants and bars now feature award-wining mixologists, and an array of truly original and one-of-a-kind cocktails. This new world of sprit-making is also a whimsical one, where the names of the cocktails are almost as important as their contents. Ultimately, however, it is the taste that comes from the creative concoctions that separates the great from the average. And for us lucky Vancouverites, we get to reap the rewards…and there are many.

Here are 9 original cocktails from 9 of Vancouver’s premier cocktail destinations. These are not your average, everyday cocktails. These are made by masters of their craft, each one a perfect combination of creativity, taste, and just the right amount of flair and funk. They truly must be tasted to be believed. 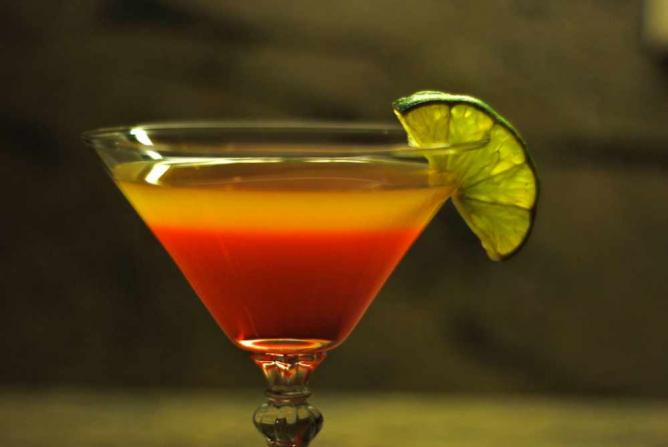 Located in the heart of Chinatown, the Keefer Bar has garnered a reputation as one of Vancouver’s premier cocktail destinations. Housed in a spectacular room, full of blacks and reds and backlit pictures, it is the home of some seriously state-of-the-art cocktails.

One of the signature cocktails at the Keefer Bar is the Chinatown Sour, their modern twist on an old classic: the Whiskey Sour. While it only contains four ingredients, two of those ingredients are just outre enough to raise an eyebrow or two. Fernet Branca is a herbal bitter, made up of a variety of herbs and spices, including myrrh, cardamom, and rhubarb. Astralagus, on the other hand, is a flowering plant used in traditional Chinese medicine. The result: a unique cocktail that perfectly reflect the neighbourhood in which it was born.

Located on Main Street, on the outskirts of Chinatown, Torafuku has become one of Vancouver’s hottest new restaurants, with constant line ups of folks eager to taste their Asian fusion cuisine and creative cocktails.

With Autumn upon us, and Winter approaching, what better time to revisit Summer with Torafuku’s signature Spiced Watermelon Margarita. What makes this particular margarita unique is not just the fresh watermelon, but the added ginger and cayenne pepper for a little kick. Nestled between a barber shop and a pub on Abbott St., the Clough Club is the epitome of a hidden gem, known by locals as a go-to destination for cocktails in Gastown.

Another Gastown favourite is the Diamond, a second floor restaurant and lounge, whose claim to fame is not only their whimsically-titled cocktail list, but also the favourite haunt for U2’s Bono whenever he is in town.

Their notorious cocktail, Old Uncle Neil, is not for the faint of heart. It packs a serious alcoholic punch, a combination of 4 different types of booze, including Cynar, a bittersweet, artichoke-based Italian liqueur. This one is made for sipping.

Located in the heart of Vancouver’s West End, Exile is one of the new “plant forward” restaurants popping up around the city, featuring locally grown and foraged plants and vegetables in both their meals and cocktails.

The Emerald Lake stands apart because of one key ingredient you don’t often see on a cocktail list: algae. Not only does it give the drink a funky blue colour, it also adds a slight natural saltiness that balances the sweetness of the maple. Truly West Coast.

Opened in the Spring of 2015, it did not take long for word to spread about the Canadian cuisine and cool cocktails at Annalena. Located in the heart of Kitsilano, Annalena has quickly become the West Side’s premier cocktail destination.

On top of its chuckle-worthy name, two ingredients stand out and make this cocktail unique: Death Door’s Gin, which comes from a craft distillery in Wisconsin where all ingredients are locally grown; and spruce tips, those ubiquitous and aromatic little green tips found on the ends of spruce branches.

Uva Wine and Cocktail Bar is the place to go for cocktails in Downtown Vancouver. At Uva, it is all about the drinks. Even their food menu is mostly small plates, meant to accompany wine and cocktails.

The Charentes Chanson, named after one of a region of France responsible for some of the greatest brandies in the world, contains 3 very distinct flavours that manage to work together: raspberry, chocolate, and pine.